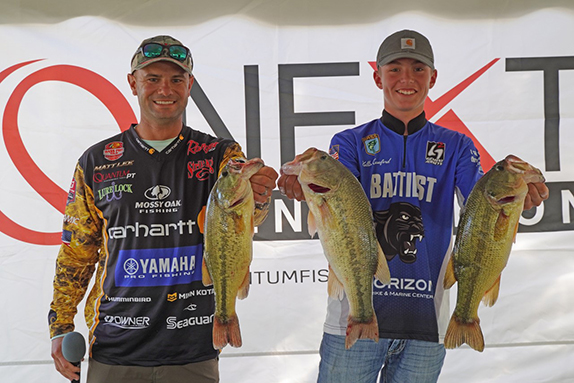 Kollin Crawford, a past Oklahoma Junior B.A.S.S. Nation champion, won the high school division last weekend at the Quantum Next Generation High School and College Open at Grand Lake. He had no team partner and his father, Lance, an accomplished tournament angler, served as his boat captain.

The no-entry fee event attracted 101 teams and Bass Pro Tour angler Matt Lee, a former Bassmaster College Fishing champion, served as tournament emcee. Crawford, who hails from a tiny town north of Broken Bow, Okla., caught his biggest fish shallow around wood on a double willow spinnerbait, and complimented it by dragging a Biffle Bug a bit deeper to win the high school division with 11.33 pounds.

In the college division, Trevor McKinney and Blake Jackson of McKendree University, made the six-hour trip home from Grand to Illinois loaded down with prizes from Carhartt, Costa, Gene Larew, Lure Lock, Lowrance, Pelican, Seaguar, and Quantum after catching 15-06. Their win was driven largely by casting vibrating jigs and D & L jigs around docks in the back of pockets.

“We love this event, we’ve fished it all three years, but we didn’t like finishing second the last two years,” said McKinney, a senior who is student teaching. “We had a great tournament this past week at Lake of the Ozarks, and we rode that momentum into this Quantum event to finally get the win.”