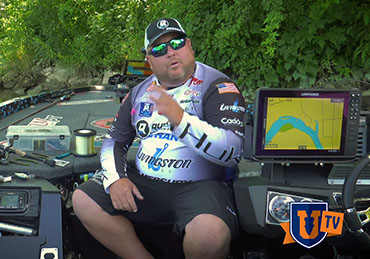 A wacky worm may be such an easy presentation to learn that anyone can catch fish with it, but don’t tell Jacob Powroznik that it’s only good for beginners. The Virginia pro has won tens of thousands of dollars with it over his three-tour career and doesn’t intend to put down his V&M Chopstick anytime soon. In fact, he’s shocked that the majority of his colleagues don’t use it more extensively.

The wacky worm, he explained, isn’t necessarily a great way to cover a lot of water, but when you learn to take advantage of the slow presentation on spawning flats or around isolated cover, it’s deadly. Nine of out ten times, he explained, “you don’t even need to move it.”

He most frequently employs spinning tackle for this technique, but usually that does not mean light line. He typically uses a main line of 20-pound Hi-Seas braid attached to a leader of 15-pound Hi-Seas fluorocarbon, but during a BPT event this year on Lake Shearon Harris, every fish he weighed in came on a pairing of 20 and 20. He ties on enough leader so that the knot is inside the biggest guide on the rod, but not inside the reel, so he rarely has to replace the fluoro during the day. He uses a high-speed Quantum Smoke S3 reel (2500- or 3000-sized) paired with a 7’ or 7’2” medium-heavy Quantum rod. The goal is to keep everything lightweight for maximum comfort, but with the power to control the big fish that this worm often tempts.

“A spinning rod is not just for light line,” he explained. It excels because he can make accurate skips with it. “I don’t want to have to throw under there 20 times.”

Powroznik prefers the V&M Chopstick because it’s tougher than some of the competition, but also sinks more slowly. That keeps it in the strike zone longer and prevents it from getting hung up quite as much. Some form of green-pumpkin is almost always his color of choice, but other shades of green – including watermelon and Mardi Gras – get time in the water on occasion. “I dip both ends with chartreuse dye no matter what I’m doing,” he said, although he’s only likely to use an O-Ring on the soft plastic when he’s skipping the lure under docks and other overhanging cover. His favorite hook is a 1/0 Mustad stinger hook, and he typically keeps four or five packs in easy reach during the course of the day. The hook is sharp and holds the bait perfectly, which means that he doesn’t have to cross a fish's eyes when he gets a bite. “Most of the time it’s just a wind and pull.”

If you want to learn some of the other ways in which Powroznik maximizes the otherwise simple tactic of fishing a wacky worm, including the knot he uses to join his braid to his fluorocarbon leader (the same one he uses for everything from bass to cobia), check out his full video, available only by subscribing to The Bass University TV.