Hays prevails at Lake of the Ozarks 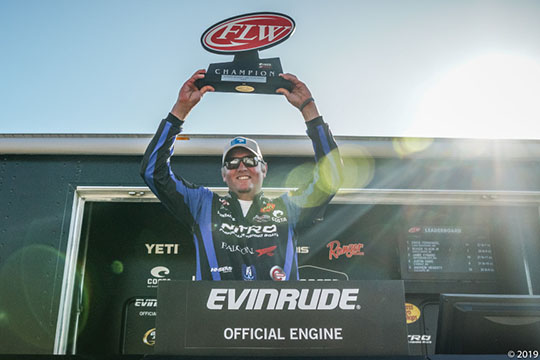 Beginning the day in 4th place, Dylan Hays caught a five-bass limit Saturday weighing 14-06 to jump to the top of the leaderboard and win the three-day Lake of the Ozarks Central FLW Series.

Hays’ three-day total of 43-14 gave him 7-ounce margin over runner-up James Watson and garnered him the top prize of $37,515. The tournament was the third and final regular-season tournament of the year for anglers competing in the Central Division.

“God is so good, man,” said an emotional Hays just moments after being declared the winner. “I am so fortunate, you have no idea. I caught a 5-pounder on my very last cast that literally came off in the net. It culled out a 15-incher. I threw it in the livewell and took off to check-in. It was literally the very last cast. You can’t make that up.”

What Hays didn’t say on stage was that he hadn’t even planned to be there. He'd planned to spend the last few minutes of his day at another spot, but when he looked at his clock he realized that he wasn’t going to have enough time to make it there and back before check-in. He audibled, and conceded to fishing a brush pile that he'd visited multiple times throughout the week.

“I hit this brush pile every day and never had a bite,” Hays said. “I wasn’t even planning to go there today but I didn’t have time to fish much else. As I was fishing up to it, I broke off my football jig, so I told myself ‘Well, I guess I’m going to close out the day with a crankbait.’ I threw a (Strike King) 6XD up in there and bam.”

Hays said that had he not broke off he would have been throwing the football jig.

“Who knows, maybe it would have bit the jig, too. I still can’t believe it happened.”

Hays said the key to his win this week was staying persistent and confident in the mentally challenging tournament.

“I wasn’t getting many bites – I only had six the first day, six the second and nine bites today,” Hays said. “Every time I tried to go to the bank and throw topwater all I would catch were little ones. So I stuck to my game plan – fishing brush and docks around the Glaize Arm of the river – and it paid off.”

Hays' jig of choice was a 3/4-ounce PB&J-colored Jewel football jig paired with a green-pumpkin Zoom Super Speed Craw. He caught his biggest fish of the tournament on a green-pumpkin Zoom Brush Hog and also weighed in 2 or 3 each day on a blue herring-colored Strike King 6XD.

“To win an event, you have to never lose a fish and I didn’t lose one all week,” Hays said.