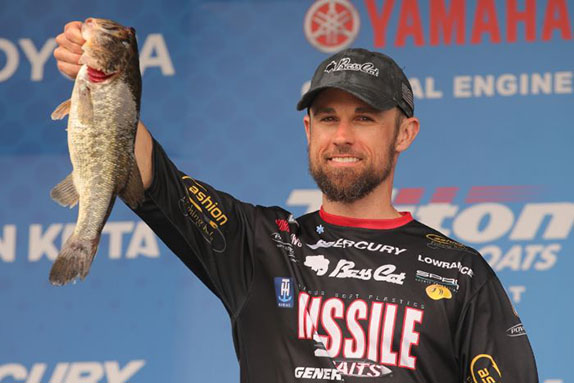 Elite Series competitor John Crews has reached the crossroads of his 2019 season this week and next as the schedule resumes with back-to-back tournaments in New York.

The veteran angler is currently tied for 22nd in Angler of the Year points after a mixed bag of outcomes through the first six events. He’s logged two top-5 finishes (St. Johns River and Winyah Bay) with four other finishes outside the top 20.

“I feel like I have had some highlights and some missed opportunities where I let decent finishes slip away,” Crews said last week at a gathering of pro anglers and outdoor media on the upper Mississippi River.

He pointed to Lake Lanier, where he finished a season-low 58th, as his big letdown of the year and he knows he can’t afford another similar result at either the St. Lawrence River or Cayuga Lake.

“I’m disappointed in where I’m at at the moment, but it’s been due to not capitalizing and that was mainly at Lanier,” he said. “I’m not very far from being in the top 10, but I’m a pretty good ways from 40th.”

Indeed, the gap between Crews and Drew Benton in 10th place is just 29 points, illustrating just how important the next two events are. He came to northern New York this week for the annual stop in Waddington with a chip on his shoulder from last year when he placed 95th.

“Last year, I never got the feel of the river, believe it or not,” he recalled. “Around the middle of day 2 is when it started to click. I caught four good ones from noon until check in. For me, getting comfortable in practice on how I want to go after them is going to be important. I have a couple new twists on some techniques I want to try. I know basically where they live, but those could be good. If not, I know what should and does work.

“That one’s going to be huge. Either I can make it easy on myself or I can make it hard. If I have a real good event, the rest of the season will be a lot more fun.”