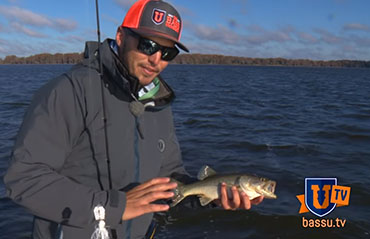 Whether you’re in Florida, where all three tours started off their 2019 seasons, or somewhere else that’s slower to warm, early season grass can produce big catches. Anyone can beat the bank and find the obvious greenery, but the fishermen who consistently excel tend to be the ones who can find isolated offshore clumps. It takes work, but it can pay off handsomely.

Australian pro Carl Jocumsen has worked hard to master this skill with hundreds of hours of cold-water idling and angling. He’s particularly fond of a Chatterbait this time of year. Flinging it randomly will produce the occasional fish, but the Elite Series pro said that the key is to use all of your equipment to your advantage. He’s benefited from “knowing my electronics back to front,” and said that without them “it just wouldn’t be possible.”

As noted above, his goal is to find isolated patches of weeds, so he idles slowly with his down-imaging on and his side-imaging set out 100 feet to each side until he sees something distinctive. “I’m trying to find particular areas that just have something different,” he explained. Once he locates them, he wants to hold his boat downwind and retrieve his ChatterBait with the current, as a shad would swim.

Don’t cast sideways or with the wind, he explained. Instead, while it may be awkward at times, set your Spot Lock where you can throw into the wind. Take your time, pick the area apart and figure out the sweet spots. One obvious place is where the grass ends, which will often form a vertical wall, a prime ambush point. He’ll cast out, bring it through there slowly, lifting the rod to the point where he can just feel the blade vibrate, and then lets the lure fall. They often hit it on the drop so he keeps his rod tip up, allowing for a controlled descent.

His rod of choice is a Millerods SwitchFreak, which is a 7’3” medium-heavy stick that he judged to be less parabolic than a typical vibrating jig rod. That allows him to stay in control. He’ll most often throw the lure on 16-pound fluorocarbon – anything heavier tends to make the bait rise too much. While cold weather is a time for slow presentations, he employs an 8.1:1 Shimano Bantam MGL XG. It allows him to catch up with a fast-striking fish and get a solid hookset.

While the ChatterBait is often his favorite way to start, when the bass begin to back off of it he’ll switch to a lipless crankbait, a spinnerbait or a little swimbait – and on some occasions will go as finesse as a Ned Rig.

If you want to learn some of the other keys to Jocumsen's offshore grass system, including why he tends to set the hook during practice, check out his full video filmed at the Harris Chain, available only by subscribing to The Bass University TV.