KVD talks about his passion for racing 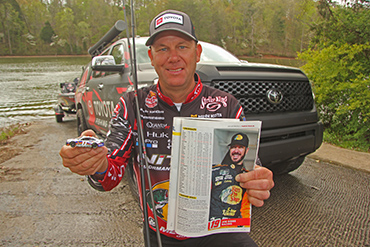 Most people consider Kevin VanDam the greatest professional bass angler of all time. But beyond fishing, and aside from cheering for his home state Detroit Lions each autumn, there’s not another sport on the planet he tracks with as much passion throughout the year as NASCAR.

We sat down with the highly decorated, class act of a bass pro from southwest Michigan to learn more about his love of racing. And it became clear VanDam’s constant attention to the sport centered on 3,400-pound cars traveling at 200 mph definitely equals his intense approach to bass fishing.

Q: How did your love of NASCAR begin?

VanDam: Several years ago, CITGO was a huge sponsor of both pro angling and NASCAR, and I got invited to participate in a “race & fish” promotion with former driver Jeff Burton at Disney in Orlando. I got to drive a car at the Richard Petty Driving School during that event, and after that I started following Jeff Burton and watching a few races. Then Jeff invited me to be his guest at a race in Richmond – and ever since then, I’ve been totally into it.

Q: You drive about 40,000 miles in your Toyota Tundra each year towing your Nitro Boat. What percentage of the time would you say you’re listening to “NASCAR Radio” on SiriusXM?

VanDam: Oh, I’d say I listen to “NASCAR Radio” about 70 percent of the time I’m in my Tundra.

Q: You are sponsored by Bass Pro Shops and Toyota, two companies with a generous history of sponsorship in NASCAR. Tell us how that marketing overlap has created some neat experiences for your NASCAR-loving self.

VanDam: Oh, it’s been awesome. Through Bass Pro Shops and Toyota I’ve worked with drivers Martin Truex Jr. and Jamie McMurray, and got to know Carl Edwards, Ryan Newman and others. I even got to emcee a charity bass tournament Ryan Newman hosted on Lake Norman near Charlotte.

Q: Which tracks have you been to?

VanDam: At least seven that I can think of. Talladega, Bristol, Daytona, Richmond, Chicago, Michigan and Texas Motor Speedway.

Q: Lastly, what’s the coolest, most memorable experience you’ve ever shared with a well-known driver?