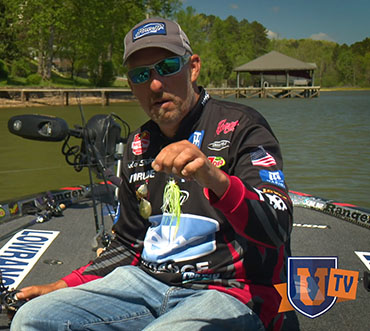 While many seasoned anglers are capable of skipping baits under overhanging cover under the best possible conditions, they tend to be pretty limited in their lure choices. Jigs and soft plastics get the call most of the time. Maybe a frog gets added occasionally, but few think to add other styles of lures to their quiver. Fishing pressured waters near his Tennessee home and on tour, Wesley Strader has learned that it often pays to try different options in places where the bass have not previously seen them.

“There’s a lot of different baits that you can skip that you may not have thought you could skip underneath things,” he said. You are only limited by your imagination and – to a certain extent – the laws of physics.

One of his favorites is a 5-inch Zoom Swimmer hollow-belly swimbait fished on a belly-weighted Trokar hook. “This thing will skip for 10,000 miles if you get it dialed in,” he explained. He fishes it on a Powell Max 765 SBR rod paired with a Lew’s Pro Ti reel (7.5:1) and 20-pound Sunline Shooter. That’s the same outfit he uses to skip a jig, although he might drop down to 16-pound Shooter. With both, you want a rod with “a little bit of tip” because most of the time you’ll be roll-casting. “You let the rod do the work.”

He rarely goes over 7’6” on his skipping rods, but does not go down to super-short sticks like some anglers. It’s all about wrist speed and the right motion, he explained. As the bait hits the water, lift up your rod tip to keep the line off the water, which adds unnecessary drag.

He turns all of the brakes off on his casting reels because any resistance inhibits ease and distance of his skipping. It takes some practice to get it right, but the payoff is worth it.

As your experience and confidence grows, a spinnerbait is another lure that can be integrated into your skipping arsenal. It’s not easy, but the ability to put it under floating docks or overhanging branches can be the difference between a full livewell and an empty one.

If you want to learn some of the other keys to Strader’s skipping success, including the various modifications he makes to his jigs to enhance their "skippability" and hook-up percentages, check out his full video filmed on the water, available only by subscribing to The Bass University TV.