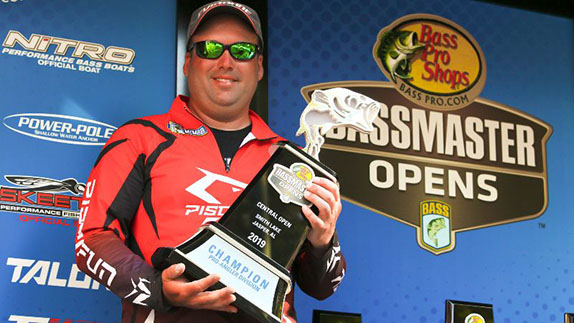 Caleb Kuphall was nowhere to be found on the list of pre-tournament favorites at the Lewis Smith Lake Bassmaster Central Open. That changed Saturday, when he won the event with a three-day total weight of 43-02.

Kuphall’s nearest challenger was Florida FLW Tour standout John Cox, who took 2nd with 42-01. Local ace Jordan Wiggins of Cullman, Ala. was third with 41-03, and David Williams of Newton, NC., settled for 4th with 41-02. Griffin Phillips of Mount Olive, Ala., was fifth with 40-11.

Kuphall, of Mukwonago, Wis., was far removed from understanding the nuances of the lake’s nomadic spotted bass. He wisely steered away from what he did not know. Instead, he went searching for largemouth and found enough to keep him in contention to win from the start.

“I came here knowing the dirtiest water would be in the upper reaches of the lake,” Kuphall said. “But I knew that I would need spotted bass in the mix, so I developed a one-two punch for both species.”

Blue herring surfacing near the dam alerted Kuphall to the presence of spotted bass. He began each morning along a 400-yard stretch of chunk rock bank where the bass were feeding upon the bait. With a limit in his livewell, Kuphall then traveled to the upper reaches of the lake, where he found a series of pockets lined with shoreline buck brush in stained water.

“It was just what I was looking for, which was the ability to flip buck brush in an area with quality fish,” he said.

The one-two punch of spotted bass and largemouth proved its potential with a day-1 limit weighing 14-04 that put him in 9th place. Friday was a repeat of the productive pattern, and Kuphall returned to the scales with a limit weighing 12-01 that landed him in 6th place. Today proved even better with a final limit weighing 16-13.

Kuphall chose two simple lures that worked specifically for each species. He used homemade 3/8-ounce jigs, one shaped for swimming and the other for flipping, and both tipped with soft plastic crawfish trailers. Green-pumpkin was the all-around choice for the jigs and trailers.

“I could see the spotted bass eat the bait in the clear water, so all it took was pitching it near them,” he said. “For the largemouth, I flipped the jig into the buck brush for the strikes.”

All week the water level was dropping – by as much as 4 feet from the start of practice until today – but that did not hinder his bite.

“The largemouth just moved out with the falling water and staged on new cover,” he explained. “The spotted bass never left because of the food source there along the rocks.”

Cox stayed on the run, choosing a junk-fishing pattern of rotating through lures based on the cover he encountered along the way. While the falling water hindered some anglers, it worked in his favor.

“It pulled fish out of the pockets and onto the points,” he explained. “It gave me fresh fish to work on because they never really got caught by other anglers.

Cox’s lure lineup included the new Berkley Choppo 90, which he used as a coverage bait. For slower bites, he used a 5-inch Berkley PowerBait MaxScent The General rigged on a 1/0 Berkley Fusion19 Finesse Wide Gap Hook.

Kuphall won $37,200 and a berth in the 2020 Bassmaster Classic, should he fish the remaining two Central Opens.

Here's how the Top 12 finished up: