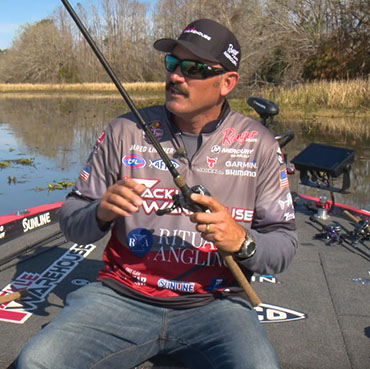 California pro Jared Lintner has some of the greatest flipping waters in the country in his “back yard,” including the California Delta, Clear Lake, and Lake Rancho Santa Margarita, which he characterizes as a “mini-Clear Lake.” That familiarity is why he loves to punch matted vegetation wherever he goes.

It can be one of the best ways to catch a massive limit, but if you use the wrong tackle to get a bait through thick grass and then attempt to get a big bass out, you’re going to be disappointed more often than not. That’s why he’s developed a system with various components that maximize efficiency.

The first element is a 7’11” extra-heavy rod from Ritual Angling. “You’ve got to have power, but you also have to have a soft enough tip to let them get the bait,” he explained. “You don’t want a broomstick.” He’s also currently perfecting a second rod that’s a little more parabolic for deep hydrilla. He pairs it with a high-speed Shimano Bantam HG, which he characterized as designed for fishing braided line. “It’s geared and tuned for these types of situations” and comes in 7.1:1 and 8.1:1 gear ratios. Ninety percent of the time he’ll spool it up with 60-pound Sunline FX2, dropping down to 50 only in clear water and sparser grass.

If the braid starts to fade, he’ll take a magnum black Sharpie, use a razor blade to cut down the center of the tip, and then run his line through it. This is particularly useful when the fish are biting in a specific depth range. He’ll approximate that range on his line and when he sees it change color he knows that he’s in the vicinity.

He’ll use the lightest Eco Pro Tungsten weight he can get away with, as low as 3/4-ounce, or occasionally up to 2 ounces. At one Toledo Bend event he paired a 2-ounce weight with a 1-ounce weight to penetrate, but only landed three of the nine bites he enticed. On anything over an ounce he adds two stoppers, starting with a regular Eagle Claw bobber stopper and then adding a Paycheck Baits punch stop. Because the heavy rod and no-stretch line can bend a weaker hook, he universally employs a Trokar Monster Flipping hook, which “eliminates the flex” – 3/0 most of the time, but occasionally a 4/0 or even a 5/0 for bigger baits.

Many of his best limits come in February and March, when the big females lie under the mats that are gathering warmth. At that time he’ll use little “cricket”-style soft plastics – compact packages with very little action. A jig might work as well in this scenario, but doesn’t go through the cover quite as cleanly. As it gets warmer, he’ll turn to a bait that’s larger and has more action, like a Jackall Archelon. No matter what he’s punching, it has to “be a little tough, not super, super soft.” Otherwise you’ll spend more time adjusting your lure between casts than keeping it in the strike zone.

If you want to learn some of the other keys to Lintner’s mat-punching success, including a clear explanation of how he snells his flipping hook, check out his full on-the-water video, available only by subscribing to The Bass University TV.