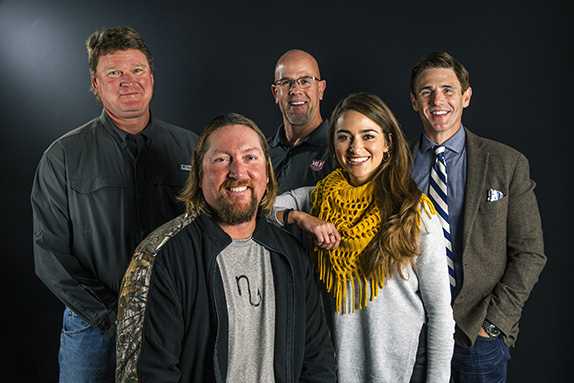 The five-person team that will be the backbone of the MLF NOW! streaming broadcast for each Major League Fishing Bass Pro Tour event will feature some familiar faces.

"I really like the dynamics of this group we've assembled," said Randy White, MLF vice president for broadcast production. "We wanted people who had different strengths and perspectives, and to that effect we have a great mix of personalities and knowledge with Marty, JT, Rob, Chad and Natalie. With each of them having their own style, it will no doubt add to the entire on-the-water viewing experience for our livestream audience."

Since 2011, Stone has been a color analyst for General Tire Major League Fishing Cup events that air on the Outdoor Channel and CBS Sports. During his pro angling career, he notched two wins among 20 Top 10s in B.A.S.S. and FLW competition.

Kenney is a former MLF Select pro who earned 45 Top-10 finishes and more than $1.5 million throughout a 17-year career with FLW. He elected to join the MLF NOW! team instead of competing in the Bass Pro Tour series.

McKee is a veteran college basketball and football announcer for ESPNU, where he also hosted the network's "This Week in the Big 12" studio show. He additionally hosts football programming on the University of Oklahoma's Sooner Sports TV.

Newell is an outdoors communicator whose articles and photos have appeared in FLW and Bassmaster media outlets for years, and he was a regular on FLW Live. He's also covered MLF events since the beginning and therefore has one of the most thorough understandings of the league's format, rules, anglers and tournament-fishing strategies.

Dillon is a social media personality with a following for her "Nattie Up North" postings on YouTube and Instagram. She developed her passion for fishing and the outdoors at an early age in her home state of Minnesota.

MLF NOW! features 10 cameras/cameramen shooting on board competitors' boats throughout all six rounds of each Bass Pro Tour event. MLF opted for the five-person talent crew instead of going with the smaller lineup used at Major League Fishing Cup and MLF Select events because of the extended real-time coverage.

"At first we looked at just a three person set, but quickly realized that five live hours a day is a lot of time for a host, analyst and reporter to cover," White said. "It made perfect sense to have a bigger team for MLF NOW! in order to capture the full excitement and keep things moving."

The organization's inaugural 80-angler event on Florida's Kissimmee Chain of Lakes is Jan. 29 - Feb. 3. Each of the eight Bass Pro Tour events will produce roughly 40 hours of live-streamed content that can be followed on MajorLeagueFishing.com.

All Bass Pro Tour venues have been vetted during the site selection process to satisfy MLF's stringent connectivity requirements because the MLF NOW! live stream and SCORETRACKER are critical elements of each competition day.

Every Bass Pro Tour stop will also become a 2-hour television show to air on Discovery Channel in the fourth quarter of 2019, and then repeat on Sportsman Channel in first and second quarters 2020.

For more information about MLF and its anglers, rules and sponsors, visit MajorLeagueFishing.com.