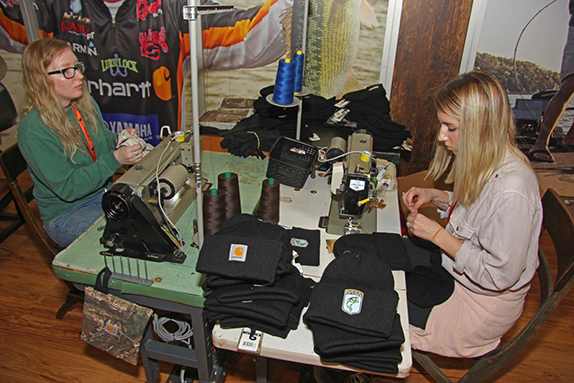 Carhartt was a big winner at the Bassmaster Classic this year. Not only did Jordan Lee, who's sponsored by Carhartt, capture his second straight Classic victory, a cooperative effort between Carhartt, B.A.S.S., and the South Carolina B.A.S.S. Nation raised $6,000 that will used as part of clean-up projects at 11 area bass fisheries near Greenville, S.C.

The funds were generated from sales of custom-made Carhartt acrylic watch caps at the Classic Outdoor Expo, where two Carhartt employees – Shelby Horn and Savannah Sparks – sewed B.A.S.S. logos on each cap, which fans received in exchange for a $5 donation.

“I like the creativity involved in my job, and watching it all come together from a pattern to a finished garment is really rewarding," said Sparks, a five-year employee of Carhartt. "And having a lot of fishing fans at the Classic thank us for still making Carhartt in America has been really neat, too."

The experience also made an impact on Horn.

"Our little town of Irvine, Kentucky, is home to one of three Carhartt sewing facilities in America, and I love what I do so much that I actually bought a sewing machine for my home,” said Horn. “At first, I was nervous about being here at the Classic, but it’s been really neat because so many fishing fans have thanked us for being here, and our work is going toward conservation and lake cleanup.”

The money will be donated to the South Carolina B.A.S.S. Nation to buy gloves, boots, tools, and trash bags for high school anglers and other volunteers who will be cleaning up trash from the fisheries.

“This $6,000 donation will be huge to funding the more than 500 youth anglers in our South Carolina B.A.S.S. Nation during their trash pick-up this summer," said Randy Mosley, President of the South Carolina B.A.S.S. Nation. "In fact, we’ll probably make a friendly competition out of it to see what schools can pick up the most trash around the lakes. But it takes money to transport these kids and buy supplies for the cleanup, so this money is really, really, appreciated."