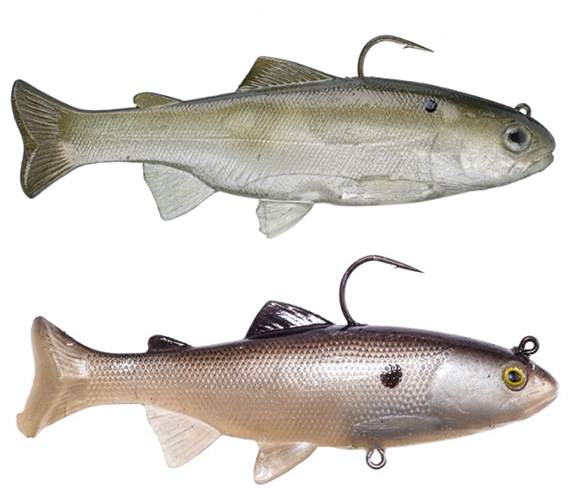 The suit alleges that the Bass Pro Shops Slo Mo Swimmer swimbait (pictured, bottom), along with other product sold online and in stores under the XPS label, violate a patent (known as the 979 patent) held by Huddleston since 2009. The patent covers baits made and sold by Huddleston, such as its 10-inch, 8-inch, 6-inch Trout (pictured, top), 68 Special and Shad swimbaits.

Samuel “Ken” Huddleston, whose company is based in Las Vegas, expressed disappointment at the situation, according to a release detailing the allegations.

“Bass Pro Shops once sold Huddleston swimbaits in their stores,” he said. “It is unfortunate to see that they now appear to be infringing my patent and even copying the unique, detailed shape of our lures. We attempted to address our concerns without litigation, but received no response. Unfortunately, that left us no option but to take legal action to enforce our rights. We respect and value intellectual property rights, and expect the same of others. We remain disappointed that Bass Pro Shops has failed to respect our legal rights, and we plan to vigorously defend our rights and to succeed in our claims against Bass Pro Shops.”

Huddleston is being represented by Kimberly Donovan of GCA Law Partners, of Mountain View, Calif., and Richard Ogawa of OGAWA PC, in Palo Alto, Calif.