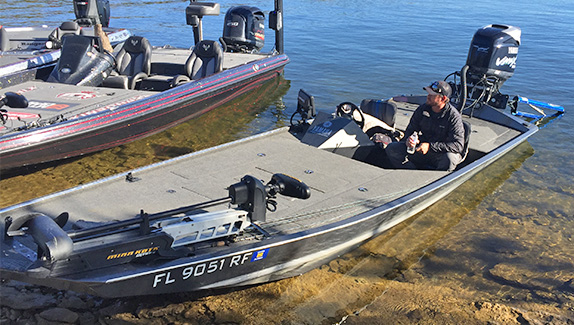 (Editor's note: This article was updated on Tuesday, Oct. 17 with comments from Ott DeFoe.)

Competitors in the Bassmaster Opens in 2018 will not be permitted to use a jet drive engine or tunnel hull boat, according to the tournament rules for next year posted on the B.A.S.S. website.

A portion of Rule 10, regarding boats and motors, has been rewritten to read:

“Only gas tanks that are installed by the boat manufacturer are allowed. No portable gas tanks or containers capable of holding gasoline can be placed anywhere on the tournament waters or shoreline for use by any tournament competitor. No “barges” or similar craft will be permitted. No boat equipped with “stick steering” shall be permitted. “Stick steering” shall be as defined by the Tournament Director. Jet drive engines and tunnel hull boats are not allowed during both official practice and competition. Any boat/hull designs other than standard mass produced units are only allowed at the discretion of tournament officials.”

Previously, the portion of the rule stated: “All bladder tanks and any other type of auxiliary gas tanks that are not installed by the boat manufacturer are prohibited. Additional gas tanks that are factory options and installed by a manufacturer’s authorized dealer are permitted. Boats that do not have factory-installed gas tanks are restricted to a maximum of 18 gallons of gasoline in tanks that meet U.S. Coast Guard regulations. Gas tanks must be properly secured or strapped in a boat.”

The changes come in the wake of Ott DeFoe’s victory last month at the Douglas Lake Northern Open in which he used a customized Tracker Grizzly 1754 MVX SC aluminum boat.

"I'm disappointed in the rule change," DeFoe said. "Innovation is what drives this sport and this has crippled it for shallow water boats. I will continue to abide by all of B.A.S.S.'s rules and do my best as a professional angler."

Drew Benton finished 6th fishing out of a custom-built aluminum rig and Mike Watson, who was 2nd after day 1 with 16-09, competed in a 20-foot aluminum boat he built from scratch.

Benton was not supportive of the rule change and said he has reached out to B.A.S.S. officials to clarify whether his boat will be allowed in an Open next year. He hadn’t received a response as of the time of this writing.

“I think it’s unfortunate because it gave anglers an opportunity to think outside the box and get away from the crowd,” he said. “It’s a deal where it’s a decision you have to make. It’s a gamble and a risk and it’s a give and take. You’re losing speed and the ability to run all over the lake for the ability to get to part of the lake you can’t with a fiberglass boat. It’s no different than having four or five graphs and Power-Poles on a boat that we can use now.”

Among other rule changes for 2018 are:

> The use of non-puncturing cull clips will be mandatory in 2018.

> Anglers who do not remove fin clips (a manmade weight designed to help deep-caught fish stabilize in the livewell) prior to verification will be assessed a 4-ounce penalty per clip.