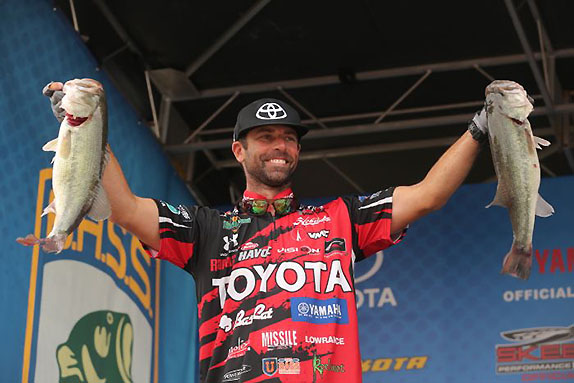 James Elam's victory at the Grand Lake Bassmaster Central Open in Oklahoma on Saturday means that Mike Iaconelli will compete in his 17th straight Classic at Lake Hartewll in March. Iaconelli's streak of appearances in the sport's premier event is the longest in the game.

"I can't believe it," Iaconelli said shortly after the weigh-in at Grand had concluded. "(Wife) Becky and I tried to keep ourselves busy and we'd been doing yard work all day, but we were watching the weigh-in.

"I think it was more stressful than any tournament I've actually been in myself. I made it by the skin of my teeth, but I'll take it."

Elam, who finished 27th in the Elite Series Angler of the Year race, became a double-qualifier for the '18 Classic with his triumph. His unused berth falls to Iaconelli, who was 41st in the Elite points.

Iaconelli is the second Elite angler in as many weeks to make the Classic via another Elite pro's Open win – No. 40 Steve Kennedy made it when Jesse Wiggins prevailed in the final Southern Division event at Smith Lake.

"It's amazing that it happened this way," said Iaconelli, who mentioned that he'll soon be sending Elam a gift card to a fine dining establishment in Tulsa. "There have been tournaments that I've been in where I knew it would come down to ounces, but this tops them all. When your fate's in someone else's hands, it's a different kind of stress."

He said this is actually the second assist toward competing at Hartwell that he's gotten from Elam in the past month. Elam was the runner-up in the AOY Championship at Mille Lacs Lake and Iaconelli was 11th in that event, and the latter said his finish would've been much lower had Elam not been so cooperative about sharing the starting spot both had found in practice.

"I had a decent tournament because of that one spot – I really didn't have anything else. We worked together on it in a really good way. If we'd fought each other, it wouldn't have turned out so well.

"That was really nice because it doesn't always happen that way."

He'd been mentally preparing himself to work the Outdoor Expo at the Classic.

"You never want to be there watching other dudes have a chance to win it, but from another perspective, it would've been fine. We're doing Ike Live (his web-streamed show) from the Classic now and it would've been fun to be involved with that the whole time. The other thing is that Abu Garcia will be launching Ike Series rods and reels at the Classic, which includes Revo spinning and casting reels, and we had some big plans when it looked like I probably wasn't going to make it.

"I'd have dealt with it all by tending to those other pieces of business."