Gluszek moves to top at Open 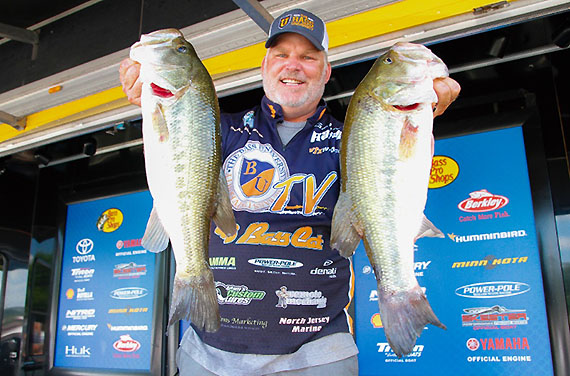 Armed with a lucky penny, veteran Pete Gluszek jumped into the lead of the second Bassmaster Northern Open Friday at the James River in Virginia.

After having some engine troubles and landing in 37th place with 10-14 Thursday, the Mount Laurel, N.J., angler caught 20-02 Friday and took over the lead with a 2-day total of 31 pounds. His Friday catch was the biggest single-day limit of the event so far.

The service crew worked until after dark Thursday to help Gluszek get his motor running again, and his lucky penny kicked in next.

“Before I left to come down here, my little boy Jake gave me a lucky penny,” Gluszek said.

Jake rubbed the penny and told his dad to carry it with him the whole week. “And it’s working,” Gluszek said.

“I am always looking for the developing pattern,” he said. “In practice, the rain came through, and it changed things on the bay because the bay gets sweltering hot and the fish do a certain thing (in the heat). Then the rain comes (again) and cools things down, and it can scatter the fish.

“But now we are back into heat waves again, and it is grouping them back up for me. So, I caught them way better today than I did yesterday.”

He has also noticed the low tide is getting better for him every day. “I think the tide is going to be better tomorrow for everybody,” he said.

Second place in the pro division is a logjam among three anglers – Garrett Paquette, Matt Madlener and Greg Dipalma all weighing in with 28-11.

First-day leader Shin Fukae of Palestine, Texas, caught a 12-pound limit on day 2 but dropped into 5th place with 28-10.