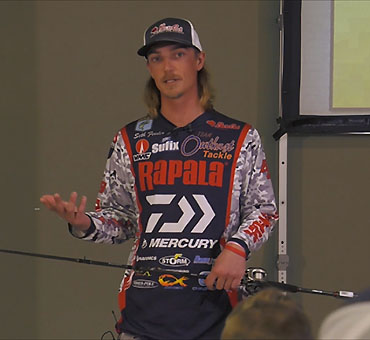 Minnesota pro Seth Feider makes no secret of his smallmouth obsession. He said that on mixed-species fisheries, he’ll sometimes chase brown fish “even if they’re not the winning deal.”

He’s quick to point out that there are two types of smallmouths, river fish and lake fish, and while they share some DNA, they often behave quite differently. Lake fish, he said, tend to be fatter and lazier, and often most susceptible to finesse techniques, while river smallies are lean battlers, and when he’s on a river he keys on certain factors to take advantage of these characteristics.

“Current is key,” he explained about the river bronzebacks. They’re always in or near it, even when they’re spawning. Also, there’s “no such thing as too shallow.” River fish spend most of their lives in 7 to 8 feet of water or less, and on most systems they rarely go deeper than 15 feet.

Because these fish are typically “super aggressive,” Feider chases them with power-fishing techniques, rarely picking up a spinning rod. That means lots of 7 1/2- to 8-foot baitcasting sticks and reels no slower than 7.3:1. He’s also a big fan of power when it comes to his trolling motor. Good batteries are key because he runs a 36-volt system and it often has to be on 70 percent just to hold in the current.

He keys on cover that includes wing dams, riprap, island heads/tails, eel grass and sand drops, but finding the best areas is often harder than catching the fish once he’s located them. Because river systems are constantly changing, he said that his No. 1 tool is often Google Earth. He’ll call it up on his phone during practice and use it to find changing structure and then to navigate it, as he did last year on the Upper Mississippi, finding sand drops that led him to a 2nd-place finish.

While Feider uses a variety of power-fishing techniques including crankbaits, jerkbaits, swimbaits and swi jigs to find and catch his fish, topwater is his favorite way to chase them. He likes an old school Storm Chug Bug much of the time. In fact, it was the only bait he threw in practice on the Mississippi, relying on a chrome version when it was sunny and a bone one when it was cloudy. On all of his power baits he likes bright colors, especially white and orange, because smallmouths are visual predators – even in off-colored water.

He throws the topwaters on braid with a fluorocarbon leader. A lot of times the fish will miss the topwater, but they’ll often hit it again and again and again. With straight mono, he has a tendency to pull the lure out of the strike zone, which kills that bite, but with the braid/fluoro combo he can leave it there until they get it. When it’s windy out, he’ll switch to a Storm Arashi Top Walker.

Jerkbaits are also a critical tool in his arsenal and he primarily relies on two of them – a Rapala Shadow Rap, which sinks slowly, in the colder months; and a Shadow Rap Shad, a slow riser, in the summertime. A square bill gets the call when he’s trying to cover a lot of water, particularly on riprap, and a swim jig has probably won more money on the Upper Mississippi than any other lure.

Once he’s found the fish, he’ll sometimes switch to “dragging baits” to eke out every last bite. A Carolina Rig is one good choice, typically with an unusually short 10- to 12-inch leader, because a lot of times the current will pull the bait closer to you than the sinker. He also likes a tube rigged “stupid style” and a football jig.

While a dropshot played a role for him in last year’s Mississippi River tournament, it’s typically a lesser player. All of them are fished on braid with a 6- to 7-foot fluorocarbon leader, except for the Carolina rig, which is fished on straight fluoro. His typical color choice is green-pumpkin, but no matter what he uses he’ll tip the tail or the pinchers with a dash of bright orange.

If you want to learn some of Feider's other river bronzeback secrets, including what often makes one wing dam more productive than another, check out his full video, available only by subscribing to The Bass University TV.