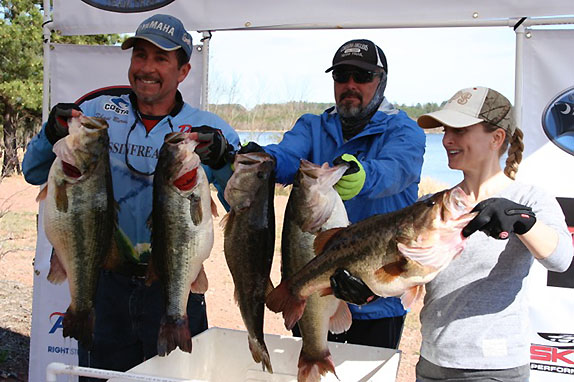 Shane Burns said he'll have a rough time readjusting to "normal-size fish" when he competes in a BFL at Smith Mountain Lake this weekend.

Just a week after catching a 42.90-pound stringer to win a Piedmont Bass Classics event at Lake Shearon Harris in North Carolina, Burns and fianceé Bonnie Kelly topped that haul by 4 pounds with a 46.89 bag in a Carolina Anglers Tournament Trail derby at the same venue.

"First let me thank my lord Jesus Christ, our savior, for giving Bonnie and I another day like the previous weekend. I had told her all week how I wish I had done a better job of promoting and getting film of that record catch. She said, 'Don't worry, honey, we can do it again.' She is new to fishing and I had to explain that was a once-in-a-lifetime time opportunity. She was confident we could do it again. I didn't believe it, but we nailed it again and this time I was prepared.

"It was the same staging spot as before. However, the Lowrance graph showed them hugging the bottom in 16 to 18 feet. This time we had the GoPro on and got the whole day on film! We kept count this time of the number of fish we caught over 20 inches. We had 30 overs and four slots (16 to 20 inches). We culled eight fish over 7 pounds, including our last cull, which was a 10.9-pounder for an 8.01-pounder.

"This week our smallest fish was 8.04. We had two fish over 10 pounds and that was the difference-maker. We caught them on 5-inch Dave's Tournament Tackle Skinny Swim swimbaits (blueback herring) and 1/2- and 3/4-ounce Dave's Mega Bite football jigs (green-pumpkin) with Dave's Sweet Tail Craw trailers.

"I don't know if I will ever get dialed into a group of giants like that again. There are few lakes in the country that will offer that opportunity."

A short video taken at the weigh-in site can be seen below.